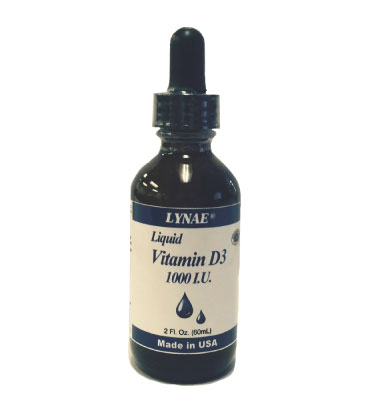 Maintains Calcium Balance
These statements have not been evaluated by the Food and
Drug Administration. This product is not intented to diagnose,
treat, cure or prevent any disease.
Quicker absorption
Essentials for Bone Maintenance
Boosts Immune System
Helps Blood Pressure regulation
Helps calcium absorption
More convenient to consume

Vitamin D3 is a fat soluble vitamin that namely plays roles in regulating the immune system, promoting bone health & calcium balance, supporting respiratory health as well as a healthy cardiovascular system. Liquid Vitamin D3 supplementation helps to improve muscle strength and suppress the parathyroid hormone, keeping calcium in the bones, increasing bone density, and reducing the risk of bone fractures, all while being absorbed into the blood faster than capsules or tablets. Research has shown that micro-ionized particles
suspended in liquid form are much more readily absorbed by the body, thus offering more positive health benefits. Liquid supplements also have the added convenience of consumption due to the difficulty some may have swallowing tablets or capsules Vitamin D3 deficiency can lead to a disease called Rickets, which is a weakening and softening of the bones brought on by extreme calcium loss. Vitamin D Deficiency has also been linked to many mood disorders such as major depressive disorder, seasonal affective disorder, premenstrual syndrome, and more. Vitamin D receptors help to regulate glucocorticoid signaling. When there is a lack of vitamin D, there is faulty glucocorticoid signaling & an increased amount of glucocorticoids, which is associated with major depressive disorder*. Research links vitamin D deficiency to development of systemic inflammation, heart disease, diabetes, hypertension, and some cancers. The benefits of Liquid VitaminD3 supplementation should not be underestimated for maintaining optimal health, as Vitamin D receptors are found in over 50 body tissues. No artificial flavors or colors. Due to the pure, natural ingredients in this product, taste, color and consistency may vary. Gluten free. Made in the USA.

There are no reviews yet.